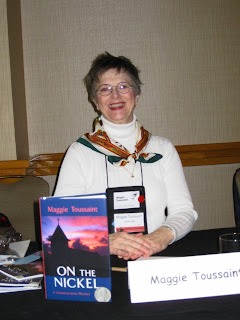 Gracious sakes! What an adventure I had at Malice Domestic. I roomed with fellow Five Star author Barbara Graham from Cody, WY, and we had the best time together. Both of us are brand new grandmothers, both have been married for about the same number of years, both have two grown kids, and both have two mysteries out now from Five Star. We had an unending supply of material to talk about!

The night before the conference we went walking about Bethesda with Barbara's best friend's daughter, who took us to a Mussel Bar for dinner. We were part of an urban scene - go figure! All I was missing were tall boots, a size 4 waist, and long hair. Well and maybe a year eraser so that I was a twenty-something again. We laughed and talked and greatly enjoyed the ambiance.

Let's see - the conference! Malice Domestic is a fan conference for mystery readers. Seemed like there was upwards of 300 people there, swelling to 400-ish with spouses etc for the Saturday night banquet. I met so many people and the names and faces are already a  colorful blur. Mostly I remember everyone being so very keen about mysteries, which is a huge ego boost to every author there.

Malice Go Round is a great event. There were 20 tables of fans waiting anxiously to hear about our new books. Two authors had 4 minutes total at each table to pitch their work and give a handout of some type, and then they moved on to the next table. The room was a-buzz with such excited chatter. Photographers roamed and would snap your picture at the craziest times. My pitch varied wildly, and I think at one point I forgot my name! But my touring buddy, author JL Wilson, kept me on track. One time she even reminded me that the car was the murder weapon in On The Nickel. Talk about losing it! My only regret is that I forgot to take my camera to Malice Go Round and didn't snap a pic of me with JL. Next year, JL, if you'll have me for a touring buddy.

New authors I met that I have photos of include Michael Mallory and Amanda Flower, both Five Star authors. I also have pictures of Barbara and myself with Peggy Ehrhart, another Five Star author I met in Maine several years ago. Other authors I met included Leslie Wheeler (a Five Star author!) and Nancy Means Wright who co-hosted the banquet table where I sat on Saturday night. I ate dinner with Beth Groundwater and several fans one night. Deborah Sharp was there with her "Mama" wedding veil. She graciously supported me by coming to my panel - thanks Deborah! I met other authors and fans, but I admit to being so starstruck that most of the names and faces blew in one ear and out the other.

Sue Grafton was there. (I ate dinner in the same room as Sue Grafton. Imagine that!) And I saw many of my friends from the Mid-Atlantic MWA. It was a joy to see Verna Suit again, along with Donna Andrews, Marcia Talley, and Trish Carrico. I met Avery Ames, a fellow Guppy who won first place with her novel - cool! She was so gracious, friendly, and fun. There were tons on SINC members there, and so many Guppies, I can't begin to name them all. Thank goodness I remembered my Guppy name tag. It was like I was in a secret club or something.

I had a blast on my Malice panel with Kaye George, Kris Neri, Kay Finch, and moderator Joan Boswell. We had quite the time in a dimly lit room at 8:45 in the morning. Hotel staff slunk in like the Pink Panther bearing floor lamps, making me silly with laughter. Everyone soldiered on as if nothing was happening, but I couldn't help commenting on it as we spoke about murder staying all in the family. Afterwards, people lined up for me to sign my books. What fun!


Roommate Barbara Graham and I took a jaunt on the Metro down to DC. Peggy Ehrhart caught the same train and went elsewhere in DC, but it was nice that our paths crossed so randomly! I admitted to being hopeless with maps and directions, so intrepid Barbara set us out on a course to see the Post Office Museum. Both of us had been to numerous Smithsonians, so this was quite a lark. We ended up a bit far from the Museum, metro-stop wise, so we spent the afternoon strolling down Pennsylvania Avenue, talking and gawking. We phoned Wyoming for directions and soon were on the right track. Eventually, we found the museum and we were impressed with the number of exhibits. Everything from wagons and planes and trains to mail bags and Pony Express riders and stamps galore. Lots of history in that place. Then it was back to the Metro to Bethesda, where I met a New Orleans gal attending Howard University, and Barbara met a young man from Wyoming who she tried to matchmake with her best friend's daughter, also living in DC.
More pics below. I'm getting my sea legs back under me today, then its off to Killer Nashville in August!
﻿﻿  ﻿﻿﻿﻿﻿﻿﻿﻿
﻿﻿﻿﻿﻿﻿﻿ ﻿﻿﻿﻿
﻿﻿


Malice is already on my calendar for next year - see you there!