It's dark in the editing cave 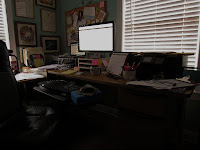 Authors talk about "editing caves" as if they are real places. My editing cave is the same physical location as my "writing cave," and yet it feels different - darker, gloomier.

A quick glance around assures me that the lights are working and my monitor is at full brightness, so why the different feel? Especially when editing is one of my strengths?

Here's my simplistic explanation. To pound out a first draft is equivalent to construction. You started with an idea and built on it, letting the imagination and/or an outline guide you. Each step of creation involves adding something that wasn't there before.

Those results are tangible and immediately transparent. A writer can step back and look at word count and see progress.

However, editing is akin to rennovating a building. Anyone ever lived through an office or home fix-up? Dust is everywhere. The noise drives you crazy. Everything is out of place and disrupted.

Those same challenges occur during editing. Sometimes it's the foundation of the story that needs work. Sometimes there's only a cosmetic facelift needed. In any event, the changeup can be disorienting.

Especially once you consider that authors are taking apart their own work. No wonder we grumble about editing! In the midst of the fix, precious words are cut, sometimes entire scenes find their way into the recycle bin. We get pulled into the microscopic level of craft, all the while trying not to disrupt the artistic flow of words that give the story fluidity.

In the editing cave, it always gets worse before it gets better. The virtual dust and noise discourage us. Many writers harbor self doubts, and it's easy to assume the story is crap at this point. Conversely, the temptation looms to hurry up and finish, to get the story launched right away, but the simple truth is, a well-edited story is a more satisfying read. 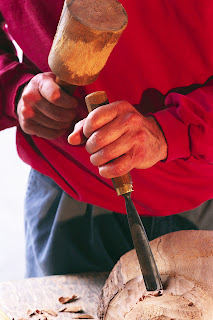 Though bookselling is competitive, I submit that we are competing against ourselves. Writing the best book possible each time hones writing craft and builds a reader base.

Sure it may be dark in the editing cave, but wouldn't you rather find the mistakes and shore up the flaws before bright lights shine on the book? I know I would.

And hopefully, I'll emerge from my editing cave in March. Rough Waters will be worth the wait!

ps you may have noticed a few differences here at Mudpies. I selected a different background to reflect my love of the ocean, a minor "edit" to be sure, but its a happy color for me. And, thanks to Jeannie Reeves, I have an updated image and I couldn't be happier with it. Thanks for your hard work, Jeannie!
Posted by Maggie Toussaint at 9:38 AM 35 comments:

Omigosh! What a week I'm having. So much good news I'm about to split open like ripe watermelon. Honest to goodness, I need to catch my breath.

Okay. Slightly better. Let's start off with the Giveaway!

The Booklover's Bench is an ultracool new site just for book giveaways. We're giving away a NOOK e-reader and five books. The books up for grabs have elements of mystery and romance, and they are page turners, for sure. Our contest runs from today, Feb 7 through Valentine's Day, Feb 14. (Gosh, I'm so excited I just misspelled Feb. Fixed it. Need another deep breath). Click on over to see what all the hoo-rah is all about! http://bookloversbench.com/

And as luck would have it, the covers to both of my summer release books arrived in the last two days. Amazing, right? 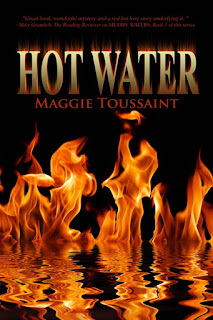 HOT WATER will release first, as an ebook, April-ish and in print in July most likely, though that's still being worked out. This is the second book in my Mossy Bog romantic suspense series, and it came about because fans kept asking me "Are you going to write Laurie Ann's story?" So I did, and this fab story has an awesome cover, don't you think?

Setting definitely plays a part in this book as police woman Laurie Ann and arson investigator Wyatt are on the trail of a serial arsonist and a murderer. You'll have the small town charm that I'm known for, the sigh of the mossy oaks, and the ever present pull of the tides - and a smokin' hot love story. 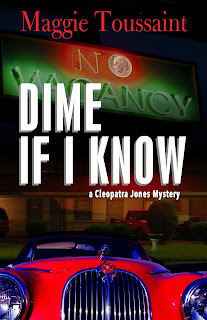 DIME IF I KNOW is my third in my ongoing Cleopatra Jones mystery series. Cleo's the single parent mom who uses her accounting skills to follow the money. In DIME, her golf pro boyfriend is implicated in the murder of a woman in a no-tell motel.

Cleo's already out-thought the cops on two other homicides, and she's most assuredly not going to let Rafe go to jail. But the strength of their relationship is tested as she realizes how little she really knows about him.

I don't have these covers up on my website or even here at Mudpies, so you're the first to see them. Except me of course, and I can't pick a favorite because they both scream "read me!"

What a fun spring and summer this is going to be.

Don't forget to click over and enter the contest at Booklovers - my funny Murder In The Buff is up for grabs over there. http://bookloversbench.com/

Have a wonderful day! 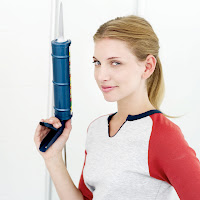 I'm not a member of the NRA and I don't have a carry concealed permit, but several events converged leading me to spend three hours this week learning how to shoot a handgun.

First, as a mystery and romantic suspense author, I like having hands on time with elements in my book - in a safe enivronment of course. I did FATS training at the Writers Police Academy a few years back and was fairly terrible. I knew I needed to up my game.

Second, there's a gun rush going on right now. It's like the gold rush because people are flocking to gun stores like nothing ever seen before. Everyone wants to buy a gun for protection.

Third, my handgun profiency (as mentioned above) is awful. I didn't even want to consider the possibility of owning a gun unless I knew how to handle one. Lo and behold, there was a class just for ladies not too far away.

Not knowing what I would find, I packed up two bottles of water, a granola bar, and a pouch of almonds inside the tote bag with my notebook and pen. The other women in the class ranged in age from new moms to seniors, and they were all keenly interested in this topic. No one had randomly entered this class. I learned the instructor is booked solid for the next three months.

We had some handouts, but it was hard to keep my eyes on the papers when there were so many guns on a stand at the front of the room. I'd never been around so many handguns. Black ones. Silver ones. Cammo-looking ones. Paper targets were posted at strategic points in the room.

We began with nomenclature for revolvers: muzzle, barrel, cylinder, hammer, grip, safety, trigger guard, trigger, and bullets. For semiautomatic weapons, there's no cylinder. Bullets are inserted in the base in a cartridge thing called a magazine.

As the instructor drilled us in stance, grip, and loading, unloading techniques, he stressed safety and the value of practicing. Also, one thing I was worried about, gun recoil, was not a factor at all. Holding a handgun high on the grip kept it steady. I had no jarring of my hands, arms, shoulders, or body.

Did you know if you have guns at home, you should handle them in front of a bookcase? That's so if a gun fires while you're handling it, the bullet will be stopped by the books. Bullets will tear through walls, windows, mattresses, and more. According to the instructor, the shelved books act like a bulletproof vest in their stopping power. Always be safe! 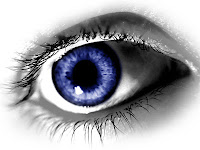 Another part of the class that surprised me was learning which eye was my dominant eye. For years and years I thought it was my right eye. Come to find out it is my left! That set me back on my heels. But sure enough, when it was my turn at the range, lefty did me proud.

Two things were hard for me. One was holding a heavy gun. Some guns were just too big for my strength. Along those same lines, some triggers of double-action guns were too hard to squeeze. Apparently, my fingers are not as strong as the average bear's.

Did I become a sharpshooter because of the class? No. I don't see that in my future at all. But I do have a new respect for what guns can do and learned that they should be handled safely. The instructor told us about biometric gun safes you can get that read your thumbprint, so that your kids can't get into the guns. 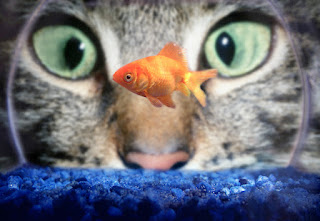 I came home smelling like gunpowder, but oddly happy that I hadn't failed. I've often joked that if I'd been born in pioneer times, I'd be dead by now. But maybe, just maybe, I would've been able to shoot a rattlesnake before he bit me.

ps congratulations to Dawn Staniszeski who just won a copy of SEEING RED, my sweet romance about the bed and breakfast money pit.
Posted by Maggie Toussaint at 1:18 PM 44 comments: