Cover Reveal for Gone and Done It

This summer and fall have been busy with a book release, two conferences, planning for next year for the Southeast Mystery Writers of America chapter, Hurricane Irma and more. BUT, I realized I needed to get this book back out there. It's the first book of my Dreamwalker Mystery series, and many people like to start with the first book.

Thanks to a very generous and talented friend, I have a cover for Gone and Done It's forthcoming trade paperback release. As soon as I get through combing through the book again, it will be released.

Meanwhile, I think this cover is dynamite. It says so many things to me. What does it say to you? 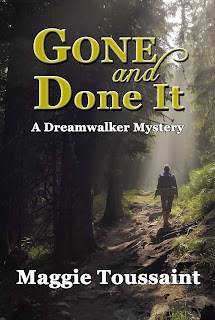 As we move into cooler weather that makes us want to curl up on the sofa and read until spring, make sure you have a good supply of books to read!
Maggie Toussaint
http://www.maggietoussaint.com
Posted by Maggie Toussaint at 10:55 AM 1 comment:

Fans of my Cleopatra Jones series will be delighted to see a brand new installment in the series. "NO QUARTER", the third novella in the anthology SLEUTHING WOMEN II, is here. 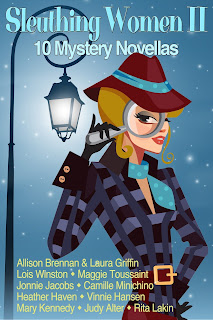 The book blurb for "No Quarter"

Amnesia, the doctor says when accountant Cleopatra Jones wakes in the hospital. A few hours later her memory returns, except for the event that sidelined her. Detective Jack Martinez visits Cleo’s tax client in the area. Only she’s dead, her finances drained. To Cleo’s chagrin, she’s a suspect. She recovers from amnesia with new goals. But will she follow her dreams before the killer returns?
KINDLE             IBOOK

NOOK           KOBO
An excerpt from "No Quarter"
“Ma’am? Are you all right?”
The voice sounded a million miles away. I barely caught the words. Didn’t matter though. I was too woozy to answer.
The voice persisted. “Ma’am. What is your name?”
Go away. Let me sleep.
Fingers pried an eyelid open, and a light blinded me. I startled, tried to rear back, only there was nowhere for my head to retreat. The light winked out, then it blazed into my other eye.
Leave me alone. I tried to curl into a fetal position, only my arms and legs didn’t move. I was paralyzed! Icy fear shot through my bloodstream. I was in danger. Had to hide. Had to sleep.
Painful tingles lanced my hands and feet. I groaned inwardly at the awful sensations. Why wouldn’t they leave me be? I felt like a slab of meat with people standing around and poking me.
“She’s coming round,” the voice said.
“Ma’am, can you hear me?” a deeper voice asked.
“Yes,” I said, only my lips didn’t move. Cold. I was so cold. I shivered and trembled.
“She’s going into shock,” the voice said.

THERE'S MORE! READ ALL THE BLURBS! 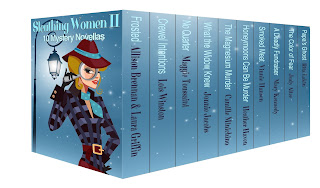 Sleuthing Women II: 10 Mystery Novellas is a collection of ten mysteries featuring murder and assorted mayhem by eleven critically acclaimed, award-winning, and bestselling authors. Each novella is a tie-in to an established multi-book series--a total of nearly 700 pages of reading pleasure for lovers of amateur sleuth, caper, cozy, and female P.I. mysteries.

Frosted, A Moreno & Hart Novella by Allison Brennan & Laura Griffin--Three years ago LAPD Detective Scarlet Moreno and rookie cop Krista Hart were nearly killed during a botched sting operation. Now, they're best friends and partners in the Orange County private investigation firm of Moreno & Hart. But their routine assignments are anything but safe.

Crewel Intentions, An Anastasia Pollack Crafting Novella by Lois Winston--Craft editor Anastasia Pollack receives a desperate call for help from former fashion editor Erica Milano, now in Witness Protection. Erica is being stalked and is afraid to notify the authorities. She once saved Anastasia's life. Will Anastasia be able to return the favor before the stalker strikes?

No Quarter, A Cleopatra Jones Novella by Maggie Toussaint--Amnesia, the doctor says when accountant Cleopatra Jones wakes in a distant hospital. Hours later most of her memory returns. Detective Jack Martinez visits Cleo's nearby wealthy client, only she's dead and broke. To Cleo's horror, she's a murder suspect. Will she totally recover her memory before the killer returns?

What the Widow Knew, A Kali-O'Brien Novella by Jonnie Jacobs--Attorney Kali O'Brien takes on the case of a young woman accused of murdering her much older, very rich husband. As evidence mounts and other possible suspects are eliminated, Kali's doubts about her client's innocence grow. Meanwhile, Kali is also grappling with her feelings for longtime boyfriend Detective Bryce Keating.

The Magnesium Murder, A Periodic Table Mystery by Camille Minichino--While freelance embalmer Anastasia Brent prepares the body of a young bride-to-be, she learns the girl's mother suspects foul play. Once again Anastasia is pressed into service as a sleuth, following a trail of clues in search of a murderer and justice.

Honeymoons Can Be Murder, A Lee Alvarez Novella by Heather Haven-- When PI Lee Alvarez goes on her honeymoon with bridegroom, Gurn Hanson, they find a dead woman practically on their doorstep. Kauai breezes may be soft, but there are gale force winds of accusation against Gurn. Will Lee find the real killer before her new hubby gets sent to a Hawaiian hoosegow?

Smoked Meat, A Carol Sabala Novella by Vinnie Hansen--Baker and wannabe sleuth Carol Sabala visits her mother for a family Christmas get-together. It's murder, in more ways than one.

A Deadly Fundraiser, A Talk Radio Novella by Mary Kennedy--When radio talk show host Dr. Maggie Walsh and her pals start digging up clues in a scavenger hunt at a glitzy fundraiser, the game suddenly turns deadly. Will Maggie and her team be able to crack the case and solve the crime?

The Color of Fear, A Kelly O'Connell Novella by Judy Alter--Kelly receives a written kidnap threat targeting her infant daughter, Gracie. Kelly's assistant Keisha narrates as Kelly and her family plot their precautions, but as time passes and the threat still looms, fear takes a toll on the family...and on Keisha.

Papa's Ghost, A Gladdy Gold Mystery Novella by Rita Lakin--Gladdy and her girls accept an assignment at a famous resort in Key West, thinking it will combine business with pleasure. Once they arrive, Gladdy suspects something is strange. Not only is their client an unexpected shock, but so is the case of murder they are expected to solve. Can they succeed when a whole city is against them?