Santa of the Waters 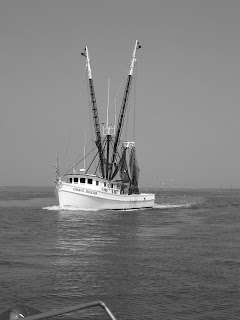 A night before Christmas, I sank in my bed,
Too tired to sleep, and plum full of dread.
Our stockings were borrowed, our tree from the yard,
Presents we had none, times were too hard.


The kids knew the story, but still they believed
A miracle or two, an angel they conceived,
Would brighten their morning with gifts galore
But we had each other, though I wished it was more.


When a ruckus arose, a dozen dogs barking,
Had someone mistaken my lawn for free parking?
I tromped to the window full ready to blow
Gun by the bed, and bat by the do’.

The moon on high water, it sparkled and glistened,
Casting the marsh into high definition.
My eyes were a-blinking, the sight was so odd
Was that a Ryals, a Thomas, a Todd?


A strange-looking trawler, a jolly round man,
With eight nimble helpers, all with deep tans.
I opened the door, my stomach full churning,
“Bubba, go home, you’ve made a wrong turning.”


My plea was ignored, an anchor plunked down,
Troubled, I grabbed my bat, and I frowned.
“No need for that stick,” said the old tar.
“We heard of your plight, we’ve come from afar.”


The voice was familiar, but who could he be,
An uncle, a cousin, a grand pappy?
Dressed in white boots, red cap and blue jeans,
He looked like a worker, not sparkly and clean.


His helpers they scurried and ran in my house.
“My kids!” I yelped, then felt like a louse,
For under the tree were presents a-plenty,
The stockings were plumped and smelling all minty.


I turned and saw clearly the man I’d called “Bubba”
Who glowed with good cheer. I lost it and blubbered,
“Thank you so much, my kids and I bless you.”
“We’re ever so grateful for all that you do.”


A smile creased his face, he nodded his head.
His helpers they beamed and turned quite red.
A laugh filled the air, one deep from the belly
Good cheer rolled along, a fish full of jelly.


“Your kids believed and that was enough,
To fill our ship with all this good stuff.”
I nodded and babbled, despite my intention
To hold it together, I just have to mention.


I’d heard of this gifter, he was no imposter,
This angler of note, this Santa of the Waters.
Master of shrimp and crab and fishes,
Best friend to children and their dear wishes.


He called to his helpers in a rich baritone,
Their names so familiar, a rosetta stone:
Come Mack and Howell, come Saul and Peter
On Henry and Darwin, on Billy and Hunter.


Snapping their fingers in Vic Waters style,
The tar and his buds, they danced a sea mile.
Diesels they rumbled, the nets how they swayed,
As they departed, they gave serenade.

“McIntosh County, a jewel so splendid,
A people so nice, highlander descended.
Your rivers are pure, your hearts are true,
Merry Christmas to y’all, a hearty wahoo.”

I kept wondering what I would get myself for Christmas this year. I'm oh-so-tempted to buy a little here and there as I'm working down my Christmas list, but this year I'd held back. Then  Publisher's Weekly surprised me with a great review.

I was anxious about this book, my first mystery not in my popular Cleopatra Jones series. Would the reviewers like it as much as my other titles? Would it tank, and there'd never be another Maggie Toussaint cozy sold? So many things go through your head when you send a book out into the world, almost like putting your child on the school bus for the first time.

Anyway, if my "gift" of a review for Death, Island Style from Publisher's Weekly is a portent of things to come, I think I can relax and let go.

My publisher was so pleased with the review that the cover was changed to incorporate the new PW quote" "exciting whodunit."


Widow MaryBeth Cashour, a former Maryland resident, makes a fresh start on the tiny coastal island of Sandy Shores, Ga., after the mysterious drowning death of her husband and her mother’s death from cancer in this exciting whodunit from Toussaint (In for a Penny). Running a souvenir and gift shop gives MaryBeth purpose, income, and a good reason to tackle crafting and shelling. When she discovers a dead body bobbing along the seashore, the police are suspicious of a newcomer with so much death in her recent past. When the corpse is linked to MaryBeth’s former life, the heat really turns up. Fortunately, there’s also heat from a handsome pharmacist in a neighboring storefront. MaryBeth realizes that if she’s ever going to drop off the police radar, she’ll have to figure out some things for herself.
Permalink: http://www.publishersweekly.com/978-1-4328-2566-9 (978-1-4328-2566-9)
I haven't figured out how to wrap this one up and put it under my tree, so I'm glad to have the Mudpies blog to showcase this wonderful gift. My publisher notified me that Death, Island Style would also release in large print, so that's two gifts in one!
To read the first Chapter of Death, Island Style, visit the Bookshelf page of my site, www.maggietoussaint.com.
Death, Island Style by Maggie Toussaint.
Five Star, $25.95 (262p) ISBN 978-1-4328-2566-9
Available March 9, 2012 from all online and bricks and mortar vendors
Wishing everyone the merriest Christmas ever!
Maggie Toussaint﻿﻿﻿﻿﻿﻿﻿﻿
Posted by Maggie Toussaint at 9:23 AM 10 comments: 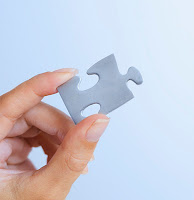 Puzzle people. They're a unique breed of determined, methodical individuals who know that sticking with something all the way to the end nets a grand reward. Oftentimes, jigsaw puzzlers start with the easy part, assembling the framework, then they work inward either by shape or color recognition or image alignment. Be forewarned though, looking at the box may be considered cheating by some serious puzzlers.

DIDJA KNOW: Jigsaw puzzles of the same size and series from the same manufacturer often have identical cuts and piece shapes.

In today's high tech world, assembling a jigsaw puzzle (or a crossword puzzle or a Suduko) may seem archaic and unimportant, but the activity has diehard enthusiasts and now the medical community is onboard singing the praises of puzzles.

DIDJA KNOW: Working on a puzzle stimulates your brain. Some say it may even ward off Alzheimer's, a memory impairing disease.

I'm one of them. A puzzler, I mean, though I probably have my share of memory issues. There's nothing I like better than seeing how something fits together. I've never been much of a take-aparter, but I dearly love putting together a puzzle. I couldn't imagine starting my day without a Sudoku number puzzle. I usually tackle the crossword puzzle for lunch. In the evenings, I engage my brain with whodunits in books or on TV.

At a mystery conference I once roomed with a woman who loved doing Sudoko puzzles on a handheld device, and she was always trying to best her former times. That's serious puzzling.

With aging relatives, I've been in and out of nursing homes over the last three years. I can recognize a puzzle person on sight. And the cool thing is, they recognize me right back. No introductions are necessary. You just slip into a chair and pick up a puzzle piece and you share in a wonderful fellowship.

If only everything in life were so easy!

PS ARE YOU A PUZZLER? Be sure and leave a comment about the kind of puzzles you enjoy or tell me if your relatives enjoy puzzles. I'd love to hear from you!
Posted by Maggie Toussaint at 9:53 AM 18 comments:

Droopy Drawers is a hot topic

I heard the term "droopy drawers news" over the weekend, and it sparked a fun memory. Way back when, probably in the stone ages, I knew someone who called another person "Annabel Droopy Drawers." (For those not from the south, "Drawers" is the refined expression for the modest underpants of my childhood and earlier.)

I always thought the expression meant that Ann didn't have enough padding to fill out her drawers, but now I have reason to doubt that as the sole interpretation. In the context of "droopy drawers" news, I believe the term is also used to indicate sadness. (And in hindsight, this gal didn't always have a sunny outlook.)

Certainly if I had droopy drawers, I'd be sad. Nothing worse than elastic failure, but I suppose in this day and age of ladies wearing slacks most of the time, having your underpants fall off isn't so much to be feared. However droopy drawers under slacks would certainly be an annoyance and that would make me sad and maybe a bit crazy. (Trust me, I won't even allow a tag under my clothes. This sort of undergarment irritant would make me as neurotic as TV detective Monk.)

The Urban Dictionary cites these definitions of droopy drawers. 1) a woman with excessively limp buttocks; 2) a person who has a load of sand and other oceanic debris in their drawers; and 3) pulling someone else's pants down to cause embarassment. (wow - I thought this last one used to be called pantsing. Shows how out of touch I am!)

Imagine my surprise to find there are droopy drawers laws in Florida and even my home state of Georgia that relate to anti-sagging. Fortunately for senior citizens, this isn't a law against aging, but a protest over those lowslung pants that mostly teenage boys wear. BTW, how do they keep those pants up? I worry that placing a cell phone in my pants pocket will make them too heavy to stay up, and my pants are firmly in place. I would hate to have really low pants like that and sneeze. Yikes!

According to a Wikipedia entry, sagging pants as a wardrobe choice is believed to have originated from the prison system, where prisoners weren't allowed to have belts for fear they'd hurt themselves or others. Once hip hop artists popularized the fad, it has since become a statement of independence and freedom. Who'd a thunk?

I think the term "droopy drawers" is an older experession, hailing from my parent's generation or earlier. I found a list of nearly 2,000 cliches online assembled by Steve Lautenschlager, and the word "droopy" was not found in the entire list. I guess there isn't a category for a walking cliche.

Hopefully, all of us are gearing up for family and fellowship with the advent of the holidays, so put away your "droopy drawers" faces and start getting into the holiday spirit!

ps - do you have a cliche you overuse? do you say things like an apple a day keeps the doctor away, the early bird gets the worm, or the pot calling the kettle black? I'd love to hear your take on cliches today.
Posted by Maggie Toussaint at 10:29 AM 20 comments: