My June 1, 2018 release, Confound It, is now available for pre-order. This is book 5 of an ongoing paranormal mystery series featuring female sleuth Baxley Powell, but it can be read as a standalone. 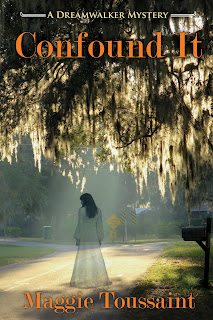 Early reviews for this book have been terrific!

"Hard to put down and surprising right up to its final revelations" -- D. Donovan, Senior Reviewer, Midwest Book Review

The blurb for this book includes the new character from last book, Deputy Sam Mayes who is Cherokee and something of a dreamwalking superstar. Read the blurb:

While hosting out-of-town guests at her Georgia home, Dreamwalker Baxley Powell is called upon to help investigate a suspicious fire. One of her guests, close friend and fellow dreamwalker Deputy Sam Mayes, accompanies her to the scene.

A meth cook is dead, and when Baxley visits her beyond the Veil of Life, she determines that the woman was murdered. Baxley pities Mandy Patterson, a single mother with aspirations for her teenage son Doodle. Unconcerned about the death of a criminal, the authorities pursue the drug-supply chain angle.

Baxley worries about Doodle and vows to find out who killed his mother.
As the case grows more baffling, Baxley struggles against her attraction to Sam. Although her husband is missing and declared dead, she does not feel free to love again until she is sure of his fate.

Two suspects have the strongest motive, but Baxley has reason to believe they are pawns in a deeper game. And unless she can stop them, the world will never be the same.

This book is available for pre-order on Amazon and Barnes and Noble and Kindle.

More at my website, including the Great Escapes Blog Schedule! https:maggietoussaint.com/confound-it
Posted by Maggie Toussaint at 4:51 PM 20 comments: