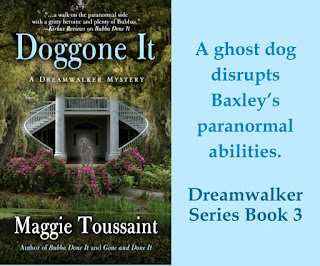 My latest dreamwalker mystery, Doggone It, is now available in Kindle format, with hardcover format becoming available in two weeks.

The reviews are starting to arrive for my upcoming release, DOGGONE IT, and I'm pleased to share with you today the entire Kirkus Review for book 3 in my Dreamwalker Mystery Series. (the paragraph indentations are mine to provide ease of reading) 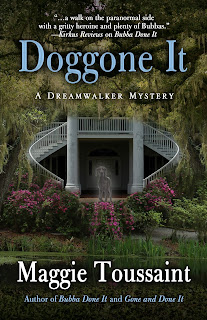 “In Toussaint's (Bubba Done It, 2015, etc.) third Dreamwalker adventure, a woman with an unusual job risks her life to unravel a mystery. Baxley Powell works as a dreamwalker for her high school friend Wayne, who's now the sheriff for their small Southern town.

Her psychic powers have helped Wayne close several previous cases, and she's come to depend on the money from her dangerous part-time job. The Army has declared her husband dead but refuses to release his pension, leaving her to wonder where he really is while she works as a gardener and petsitter to pay the bills for her daughter, Larissa, and herself.

Now tales of a buried pirate treasure have prompted someone to dig holes all over town, and when Baxley's best friend, Charlotte, a reporter bucking for a promotion, begs her to look for clues in June's Folly, a reportedly haunted house, the visit nearly kills her. Only the interventions of Rose, a powerful spirit, and Oliver, a friendly canine ghost, save her from being overwhelmed by evil forces.

Meanwhile, a film company has spent a lot of money in the area to make a movie about the fabled pirate treasure. But not everyone is happy they've come. When someone viciously murders a film-crew member and a local boat captain, suspects abound.

Baxley's father, also a dreamwalker, and her mother, whose crystal therapy has helped Baxley recover from other dangerous encounters, warn her to be careful. But she knows she has to be a force for good no matter how dangerous the task, and she attempts to muddle through with some timely assistance from a suicidal medium and a Chihuahua. Plenty of hair-raising action as the likable, gutsy lead battles forces of evil.” – Kirkus Reviews

I couldn't be more pleased! Thank you, Kirkus for such a wonderful review.

Pre-order of the hardcover available now at Amazon and Barnes&Noble. The digital format is not available on pre-order. It will release on October 19, 2016.

I have a blog tour booked with Great Escapes (Schedule is posted on my website's home page) and I'll be hosting a Facebook Launch Party. Folks within driving distance of coastal Ga, keep an ear out for my booksigning in Darien in early November.

Have a great weekend everyone!