OMG! On a panel with Charlaine Harris!

Are my feet touching the ground? Not hardly! I was lucky enough to draw a panel assignment with my friend Tj O'Connor and my writing idol Charlaine Harris. We were talking about paranormal mysteries at Malice Domestic today. 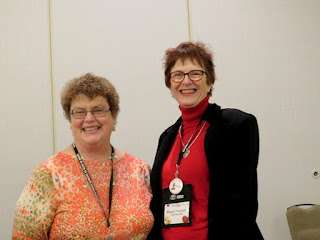 Holy Cow. I'm still grinning like a crazy woman. First, let me say that Charlaine is the Most Gracious, Most Charming, and Most Personable person in the world. It was hard not to be tongue-tied sitting beside her. But I took one for the team because due to the small size of our panel being in the middle often means that the moderator, in our case the capable Eileen Watkins, starts at one end or the other of the panel. Having that buffer of time helps me to collect my thoughts or sneak a peek at my notes so that I don't babble and ramble.

Before I ever thought I'd write paranormal mysteries, I read in the genre, and Charlaine's books were my favorites, especially her Sookie Stackhouse series. So I did my best to sound coherent, to look like I was paying attention to everyone, and to try not to let my  fan girl crush on Charlaine turn me into a blithering idiot. 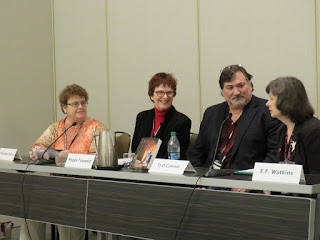 We had a lively time because the topic and the panelists were all so fun, and the attendees seemed to really hang on our every word, even mine.  It was a MOMENT for me, an honest to goodness life moment. I'm still saying to myself: I was on a panel with Charlaine Harris. I sat next to her. She knows my name. She kindly posed for pictures before and after the program. I got to talk shop with her. She laughed (in a good way) at the humor In Bubba Done It I used as an illustration to answer a panel question.

Thank you, Malice Domestic, for making my dream come true. 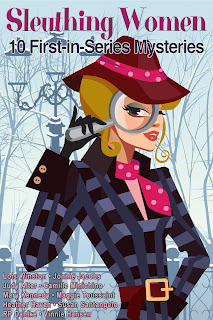 Sleuthing Women Mysteries is a 10-author anthology of first-in-series cozy mysteries, including my IN FOR A PENNY. This bargain-priced book is in pre-order right now at Amazon, Nook, Kobo, and iTunes. It will be available for release on May 1, 2016. A short description of each of these full-length mysteries follows.

Assault With a Deadly Glue Gun, an Anastasia Pollack Crafting Mystery by Lois Winston—Working mom Anastasia is clueless about her husband’s gambling addiction until he permanently cashes in his chips and her comfortable middle-class life craps out. He leaves her with staggering debt, his communist mother, and a loan shark demanding $50,000. Then she’s accused of murder…

Skeleton in a Dead Space, a Kelly O’Connell Mystery by Judy Alter—Real estate isn’t a dangerous profession until Kelly O’Connell stumbles over a skeleton and runs into serial killers and cold-blooded murderers in a home being renovated in Fort Worth. Kelly barges through life trying to keep from angering her policeman boyfriend Mike and protect her two young daughters.

In for a Penny, a Cleopatra Jones Mystery by Maggie Toussaint—Accountant Cleo faces an unwanted hazard when her golf ball lands on a dead banker. The cops think her BFF shot him, so Cleo sets out to prove them wrong. She ventures into the dating world, wrangles her teens, adopts the victim’s dog, and tries to rein in her mom…until the killer puts a target on Cleo’s back.

The Hydrogen Murder, a Periodic Table Mystery by Camille Minichino—A retired physicist returns to her hometown of Revere, Massachusetts and moves into an apartment above her friends' funeral home. When she signs on to help the Police Department with a science-related homicide, she doesn't realize she may have hundreds of cases ahead of her.

Retirement Can Be Murder, A Baby Boomer Mystery by Susan Santangelo—Carol Andrews dreads her husband Jim’s upcoming retirement more than a root canal without Novocain. She can’t imagine anything worse than having an at-home husband with time on his hands and nothing to fill it—until Jim is suspected of murdering his retirement coach.

Dead Air, A Talk Radio Mystery by Mary Kennedy—Psychologist Maggie Walsh moves from NY to Florida to become the host of WYME's On the Couch with Maggie Walsh. When her guest, New Age prophet Guru Sanjay Gingii, turns up dead, her new roommate Lark becomes the prime suspect. Maggie must prove Lark innocent while dealing with a killer who needs more than just therapy.

A Dead Red Cadillac, A Dead Red Mystery by RP Dahlke—When her vintage Cadillac is found tail-fins up in a nearby lake, the police ask aero-ag pilot Lalla Bains why an elderly widowed piano teacher is found strapped in the driver’s seat. Lalla confronts suspects, informants, cross-dressers, drug-running crop dusters, and a crazy Chihuahua on her quest to find the killer.

Murder is a Family Business, an Alvarez Family Murder Mystery by Heather Haven—Just because a man cheats on his wife and makes Danny DeVito look tall, dark and handsome, is that any reason to kill him? The reluctant and quirky PI, Lee Alvarez, has her work cut out for her when the man is murdered on her watch. Of all the nerve.

Murder, Honey, a Carol Sabala Mystery by Vinnie Hansen—When the head chef collapses into baker Carol Sabala’s cookie dough, she is thrust into her first murder investigation. Suspects abound at Archibald’s, the swanky Santa Cruz restaurant where Carol works. The head chef cut a swath of people who wanted him dead from ex-lovers to bitter rivals to greedy relatives.

Pre-order your copy now and it will be delivered on May 1st. Give this present to yourself and have plenty of fun reads on hand for all your summer vacations!