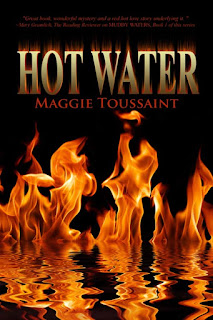 Today through Saturday, May 18, Hot Water is FREE on Kindle. Here's the link: http://tinyurl.com/d9ly236


In my new romantic suspense, police officer Laurie Ann is hoping to move up the ranks in her chosen field. She can hardly believe her good luck when an accidental death that she's assigned to cover becomes a homicide case. She's assigned to work with an arson investigator to find answers.

Arson investigator Wyatt thinks he may finally have a lead on the arsonist who killed his firefighter partner. This guy's been a ghost, not following a standard profile, but the Mossy Bog homicide and fire is just the jump start he needs to get justice for his buddy.

Lots of cops and robbers stuff in this book, and all the heat isn't from the fires. Laurie Ann and Wyatt strike sparks off each other from the get-go. But they are also career-minded individuals who put their jobs ahead of their personal lives. But its a brave new world. Who's to say they can't have both?

Here's an excerpt from the book:

Her pocket chirped.
The phone.
Wyatt’s name flashed on the display. Her smile went bone-deep at the sound of his deep, rumbling voice.
“I’m headed your way,” Wyatt said.
She pressed the phone closer, hungry for his news. “Was it your arsonist?”
“Not hardly. An amateur started this fire. The burn was less complete. No structures were involved, and no one died.”
He sounded disappointed. “Those are good things,” she reminded him.
“I need to catch this guy.”
“You will. When one of my cases stalls, I go back to square one. There’s usually another line of inquiry buried somewhere in the information.”
“I’ve been over the files so many times I can practically recite them. If anything was there, I’d have found it by now.”
“I’ve been thinking about our case,” she began. “About tangential information.”
“Yeah?”
“James Brown wasn’t always the town drunk. He did odd jobs for a long time, and he was a good worker. Daddy occasionally brought him out to the house and gave him work, food, clothes, and some money.”
“Your father’s a good man.”
His observation was on point. She cleared her throat. “Just thinking out loud here. Somehow, he went from productive to shiftless. I want to know why. I’ve got a lead on his last known associates, Ray Spivey and Frankie Miles.”
“Go ahead and pick Spivey and Miles up. I’ve got questions for them, too.”
“They’re in the wind. I put out a BOLO on them. They’ll turn up soon. Not many hiding places floating in free booze in Tidewater County.”
“Good.”
He sounded weary, and that depressed the hell out of her. “How about dinner tonight?” she asked, hoping she didn’t sound desperate or needy.
In the time it took him to answer, she mentally kicked herself to the curb and back three times. Men didn’t like take-charge females. Men liked to think they were in charge. Men liked to do the asking.
“Dinner sounds great,” he said. “I’ll be in Mossy Bog by six. Where shall I pick you up?”
Might as well jump off the high dive, she thought to herself. “Come out to my place. I’ll cook dinner. Any food allergies or preferences?”
His voice deepened. “I eat anything that isn’t moving.”
She laughed as her mind veered off on a big bad wolf tangent. The better to eat you with, my dear. Would Wyatt North eat her up? “I promise not to serve you roof shingles or road kill. Come on out whenever you’re ready. Dinner’s at seven.”
“It’s a date.”
The phone clicked in her ear before she could tell him where she lived. This would be interesting. She gathered up her pile of weeds and carried them to her new compost pile behind the pump house. The entire edge of the adjacent woods was fronted by a bamboo thicket, courtesy of her great grandmother.
How resourceful was Wyatt? Would he wander the back roads of Tidewater County for hours? Would he call and admit he was lost?
++
Want more? Download your copy right now. http://tinyurl.com/d9ly236

ps Hot Water will release across all digital platforms July 12, and will also come out in trade paperback on July 12. Sign up for my newsletter to be sure you stay in the loop!
Posted by Maggie Toussaint at 7:45 AM 14 comments: