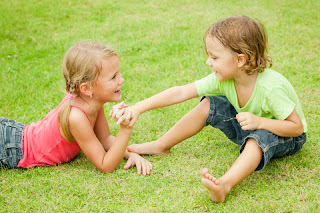 Some of us are lucky to have best friends. It’s rare to have multiple best friends simultaneously, but I’ve been blessed to have two best friends my entire life. They are sisters, and they were my next door neighbors forever.

We grew up sharing scraped knees, Barbies, favorite songs, and chicken pox. We listened to rain on a tin roof, caught blue crabs in tidal creeks, and confided our deepest darkest secrets to each other. We forged friendships that have spanned more than fifty years.

So, when I decided to create a character foil for my amateur sleuth Baxley Powell, I wanted her to have the same rich and enduring friendship I’ve had. Newspaper reporter Charlotte Ambrose appears in every book of the Dreamwalker cozy mysteries, but she was in Baxley’s life long before the series.

In firming up their backstory, I decided this pair had been inseparable since grade school. Charlotte struggles with her weight, with confidence, and with upward career mobility. As a fulltime employee at a weekly paper, she can get title promotions, but the job remains the same, no matter the label. Meanwhile, Baxley struggles with her unusual skill of communicating with the dead, her burning desire to be normal, and her decision to suppress her psychic abilities for most of her life. 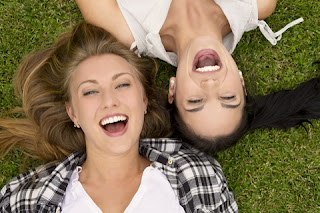 This closeness works out well for best friends in real life and for characters in stories. For instance, when everyday things that happen to us, we turn to our friends first. Our friends are our sounding boards and our barometers. They tell us when we’re messing up, and they rat us out to our folks when we need it. The same goes for Baxley and Charlotte.

In book one of the series, Gone and Done It, Charlotte helps Baxley through the decision to become the Dreamwalker. She helps Bax when the admission of power totally whitens Baxley’s forelock. On the flip side, Baxley clues her friend into the first murder the county has had in forever. That’s solid gold and pure adrenaline for an ambitious reporter like Charlotte.

In the second Dreamwalker mystery, Bubba Done It, Charlotte gets first dibs on reporting the banker’s death, but her astute observations shape the overall police investigation. There’s a lot of give and take in their relationship and a squabble or two for good measure. As always, Charlotte remains the brains of the pair and Baxley the pluck. 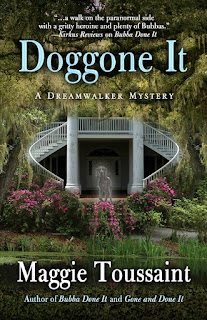 And now we’re to book three in the series, the subject of this book release blog tour, Doggone It. With several months of dreamwalking under her belt, Baxley enjoys a more formal relationship with the sheriff’s department. The increased work and pay make her life as a single mom easier, but the more cop work she does, the less she can confide in Charlotte in real time. With Charlotte being a member of the press and Baxley on the side of law and order, a rift in their friendship threatens.

In addition, Charlotte’s reporting of two previous murder cases shakes up the pecking order at the paper and gains her notice throughout the state. She’s sure her next murder story will springboard her to a bigtime career. While Charlotte pursues fame and fortune, Baxley keeps a low profile. The people she meets are either dead, criminals, family of the dead, or cops. Her dreamwalking clients drop by at all hours of the day and night, leaving her little time for her friend.

Adjustments must be made if Baxley and Charlotte are to remain close friends.

Read more about Baxley and Charlotte in Doggone It!
Buy link on Kindle and Hardcover