Some rambling thoughts on the future of book reading and author marketing...

I’m a hybrid author, with books out through a few traditional (and one non-traditional) presses as well as some titles I’ve released myself. My sales rise and fall, seemingly on the fate of the wind, though my marketing efforts are consistent and expanding.

The population who read mystery and romantic suspense are aging. Macular degeneration and other reading-related issues are game-changers, as are other long-term health issues with readers or the parents they are suddenly tending. Mystery fans are loyal, though, so the challenge is to keep them aware you’re out there without annoying them with too many “buy me! Buy me!” messages.

Print books are here to stay. So are ebooks. Having multiple book formats (including audio) helps authors access readers on all platforms.

The DIY pressure on indies is immense. I put out a new title in 2015 and I’ll release another book in 2016. You can’t skip any steps or your product will suffer. A strong, well-edited story is what you want to bring to market. The cover needs to be awesome in an eye-catching, provocative kind of way. Formatting needs to be spot on, and typos must be invisible to man and machine. Then there’s the whole selection of keywords for the web crawlers and readers to use to locate your books. This is more important than you might think. And finally, getting the word out in a friendly, compelling way. It’s no wonder authors farm some of this out. It’s a lot of time and effort to get a high quality book out there.

Some indies and some pre-published authors will say to heck with this and spend more time with their grandkids. I mean, who hasn’t had those thoughts?

The rest of us, the ones who’ll go crazy if we don’t get these story people out of our heads, will hunker down and find a way to survive. How do I know this? Easy. I’ve been doing it for a few years now and so have you. We will continue to network through great resources like SINC, and we are stronger because of the ties we form, the alliances we make for marketing.
--
SIDEBAR: anyone here a Survivor TV show fan? This year the strategy changed from alliances with a few trusted associates to voting blocks, where people scrambled around and voted independently  when it suited their solo purposes. The publishing world to me is like the game of Survivor. Whether we use alliances or voting blocks to command market share, we are pooling efforts, melding audiences, and benefiting from cross-promotion. Something to think about if you haven’t already. And good luck to all our authors and readers in 2016. 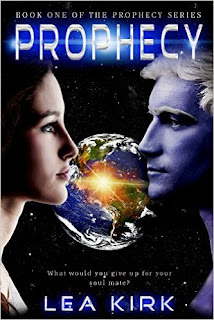 A fresh new voice in Science Fiction Romance! Lea Kirk blends fiction and myth into a compelling tale of treachery, disaster, and hope.

One moment was all it took for the world to change. Nurse Alexandra Bock was on her way to meet her brother for lunch when a spaceship appears in the sky. Buildings crumble. People vanish. And Alex and her brother are captured.

In her cell, captives from another world offer Alex comfort and aid. One of them heals her busted eardrum. Trust is hard to come by, but the sensual tug between Alex and Senior Captain Gryf Helyg is undeniable. She’s appalled to learn his world is also on the brink of extinction from these same invaders. To make matters worse, according to an old prophecy, her attraction to Gryf might not be random. If they work together and are successful, great things could happen.

The odds of overthrowing their captors are against them, but quitting is not an option.

I received an advanced reading copy of this book in exchange for a fair and honest review. 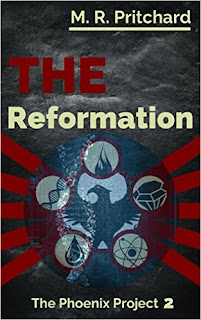 The USA is a mess, and Adam Waters’ CIA contact is late to a meet. The man shows up late, fatally wounded, and announces that the Reformation has begun. With bombs and missiles rewriting American history, Adam starts up the train and speeds back to the Phoenix District, near NYC, where he works undercover as the District Runner and as a rising star in security.

Andi, a geneticist who is forcefully encamped within the Phoenix District, is appalled at the role she’s thrust into within the settlement. After her last attempt to escape, the ruthless leader had her beaten to within an inch of her life. He exiled her to a farm within the district to heal out of sight and to reconsider. Her body is slow to heal, her mind even slower, but somehow she holds it together for her young daughter.

Fortunately for Andi, she’s not disposable. Her brilliant genetic insights are solving problems that have been on the table for years. With each solution, her standing rises in the community, elevating her to The Matchmaker, a position she despises. Trapped, her only solution is to survive and protect her daughter.

What a great read! Each scene fed eagerly into the next, like a freight train gathering speed. Twists and cliffhangers abound. I admired Andi’s passion, guilt, and humanity, while at the same time admiring Adam’s warrior toughness and surprising tenderness toward her. This is a guarantee. Andi and Adam’s story will keep you turning the pages. 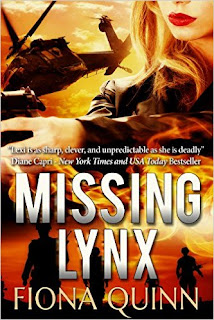 Lexi Sobado, aka Lynx, a psychic with an aptitude for seeing patterns others miss, is now a full-fledged strategist for Iniquus, an off-the-book Black Ops group. She’s thrilled to be working alongside her favorite people, and her relationship with Striker Rheas is on its way to becoming the Real Deal.


But things change when her mentor finally returns, sick out of his mind with malaria and brimming with classified information. He’s instantly off limits to Lexi, which is not okay in her book.


Meanwhile, she stays busy working Iniquus cases, making a name for herself. With each case she tackles, she feels the mental approach of a predator, which in her mind shows up as a white leopard. The one person she feels she can talk to about this, her mentor, is not available, unsettling her.


All too soon, Lexi’s been targeted and she’s faced with the task of figuring out the most important puzzle of her young life. This time the life and death stakes are hers and hers alone.


My thoughts: Holy cow! Get ready to be put through the ringer! I read this book in one sitting, honest to God, because I had to know what happened next. Fiona Quinn grabbed me on page one and didn’t let go. Thank goodness the next book in this series is already out. I don’t want to miss anything! My only warning is don’t start this book at bedtime unless you can afford to stay up all night. This one’s a keeper.